- Percentage discounts (e.g. 15%, 20% etc.) are available to customers who purchase a policy and are applied as detailed in the promotional material.

- Sometimes our promotional offers will be exclusive to policies purchased through either our Call Centre or online at allcleartravel.co.uk

- Discounts only apply to the base premium of your travel insurance quote and do not apply to any premium generated to cover medical conditions.

- Discounts only apply to the base premium of your AllClear Gold and Gold Plus quotes and do not apply to any premium generated to cover medical conditions.

- Policies can be purchased over the phone or online at allcleartravel.co.uk

- To qualify for the relevant discount, customers must quote the discount code at time of purchase.

- Customers must refer to the promotional material for qualifying dates, if applicable.

- The discount value is as stated on relevant promotional material.

- AllClear reserves the right to change the offer at any time.

- No cash alternative will be given.

- The offer cannot be redeemed against existing policies.

- The discount offer cannot be used in conjunction with any other offer.

- We can only apply one discount to each policy. Some discounts are offered via promotional code, some are built into the system. When the system discount is higher than what would be achieved via the promotional code this takes precedence to make sure our customers are always offered the best possible price.

- AllClear reserves the right to amend these rules at any time.

ONLY In our Call Centre

Available Online & via Our Call Centre 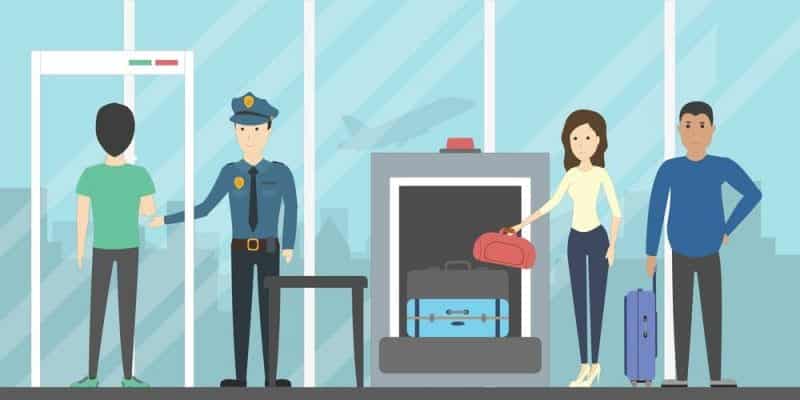 Thousands of people across the world travel by air with metal implants every day. Whether you’ve had a knee or hip replacement, or another type of metal implant fitted following an injury or operation, it can be nerve-wracking going through airport security.

Although it can be inconvenient setting the alarms off at airport security, it may help you to know what to do and what to expect when placed in that situation.

What happens if my metal implants set the alarms off?

It’s standard procedure to take anyone who sets the alarms off to one side for another screening. This could be with a wand scanner, a pat down or in some airports, a full body scan.

If your metal implants have set the alarms off, this is when you would probably want to explain that you have them for medical reasons. However, at this stage you will still have to have a second screening, as would anyone who has triggered the alarms regardless of the cause. Not all airports currently have full body scanners, but if the one you’re in does, this would be able to detect any implants as well as prosthesis or colostomy and would prevent you needing to have further scans. The FCO explains that “security staff have been trained to handle sensitive issues around surgery and treat passengers respectfully”.

Is there any way I can prove I have a metal implant to get through security quicker and without a fuss?

Unfortunately, there is no official document you can carry to prove that you have metal implants to excuse you from having further screening. The British Orthopaedic Association used to issue ‘Orthocards’ to make getting through security less time consuming and stressful for those with metal implants, however, they are no longer able to issue these. Although no reason is given on their website, this could be due to tightened security measures in airports.

There’s nothing to stop you carrying a note from your doctor explaining that you have metal implants, however, you would still be required to have a second scan if you were to set the alarms off.

Some modern screening devices can detect metal implants, allowing security to see what’s been causing the alarms to go off and preventing further screening. These devices are the full body scanners which are becoming increasingly common across airports.

Essex based compliance support officer, Stuart Kira, has had firsthand experience of travelling with metal implants. His wife, Angela, has a metal knee and has more recently had an implant placed in her hip. Stuart says their experience has really varied and they have found it frustrating that there’s nothing in place to make the process more consistent throughout airports.

“Of course, I don’t mind the security, I know it’s necessary and very important but it’s different every time. One airport will do an extra scan of my wife’s knee then let us through with no fuss, then other times, my wife has been taken off on her own to have more scans which has been intimidating and intrusive for her.”

“The worst situation was when my wife was taken into a separate room by two female security officers and I wasn’t allowed into the room with them. They didn’t seem to listen to us when we explained that she had a metal knee and they kept us behind for around 10-15 minutes.”

“If there was something secure that couldn’t be duplicated or forged, like a chip within the passport then this problem would be solved.”

Stuart wrote to the airport involved to explain that they were unhappy with how they’d been treated but the response they got back was fairly standard and it simply explained that the security checks in place were routine.

What’s the future for travelling with metal implants?

As we can see from Stuart and Angela’s story, this can be frustrating and intimidating when you know what’s causing the alarms to go off but can’t get this across to security staff.

It seems the most suitable way forward would be to continue to implement full body scanners across airports to easily detect metal implants and to reduce the amount of inconvenience and stress caused. This is probably the easiest way to identify metal implants in passengers and may therefore help resolve a lot of those issues people are currently experiencing.

Do you have metal implants? What is your experience of travelling with them? Can you relate to Stuart’s story? We’d love to hear from you, tweet us @AllClearTravel

The information in this blog post is not intended to replace professional medical advice. It is a general overview of a broad medical care topic. Blog posts are not tailored to one person’s specific medical requirements, diagnosis or treatment. If you do notice symptoms or you require medical advice, you should always consult your doctor or healthcare provider to obtain professional medical help. Read through our disclaimer for more information.

Join Over 200,000 subscribers and receive news, special offers and tips.